Simon Greenall
Zom-Zom the Far-Out(pronounced Zoom Zoom) is an eccentric character who runs a travelling costume shop. He speaks in an unusual accent with potentially French inflections, despite his rather Arabian stylings.

Zom Zom first appears in Manglewood, trying to lure Sackboy to come and check out his shop. He never does this again, however, as he only appears in his shop in The Ziggurat and Bunkum Lagoon. He does not play any part in the main story. His only role is to provide costumes for Sackboy to buy with Collectabells he finds around each hub world. Each of the three stores initially carries 100 Collectabells worth of merchandise. If you purchase five costumes from any Zom-Zom's store in any theme, you'll get a special item known as the Illuminator.

In Sackboy: A Big Adventure

Zom Zom reappears in this game. Like LBP3, Sackboy can collect Collectabells throughout the World Maps but they can also now be found within levels and scoreboards. Sackboy now also can buy individual costume pieces off Zom Zom, as well as entire costumes. Sackboy can also buy emotes that can be further customised and equipped through his shop. His shop also now has the ability to change the colour of costume pieces bought or found using paint swatches Sackboy has collected.

Zom Zom also runs optional Collectabell stages, in which Sackboy must collect as many as he can before the time runs out. These are initiated by slapping a purple genie lamp that will randomly spawn on the World Maps on designated podiums.

Zom Zom is a short character, using Little Toggle as his base mesh. He appears to have an Eight Ball for a head, tilted sideways with dots in the eight holes for eyes. He wears a starry, purple turban adorned with a plastic jewel on it that's fixed with a safety pin. He wears a purple and gold waistcoat with a large flared collar over a blue shirt. He also wears a purple sash around his waist, black trousers and curled, purple shoes.

In Sackboy: A Big Adventure his beard and moustache are made of yarn instead of regular hair. And his undershirt is blue instead of red.And the 8 on his 8 ball is silver instead of black.

Zom Zom is a minor character and through all his appearances just speaks about his shop. Although eccentric and excitable he also seems greedy, since once you buy all clothes from a shop his reaction is to celebrate that his pockets are full of Collectabells. He is also quite persuasive and persistent, constantly pointing out his designs, with a bit of vanity.

In Sackboy: A Big Adventure

In this game Zom Zom's shop can be accessed at all times through the menu. Alternatively Zom Zom can be found physically in every world in shops which are located right next to The Pod. Except for: 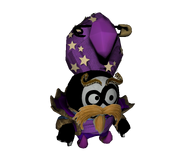 Zom Zom in the Alpha Version of LittleBigPlanet 3 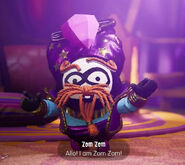 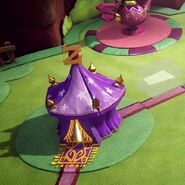 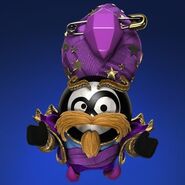 Zom Zom as an Avatar for the PS4.