Zola is the second of the Creator Curators. He is the king of The Savannah, the second set of levels in the game, LittleBigPlanet. He is another character than can be obtained in the level The Collector's Lair.

During the start of the level Swinging Safari, Sackboy is launched to the surface in a submarine and accidentally fall into one of Zola's creations and break it. The Wobbly Ape that stands near the accident then tells the player that the player must find Zola and see if he can fix it. When the player reaches Zola, he then tells you to find out what is startling the buffalo of his world. He does not appear again after the Swinging Safari level until The Collector's Lair, in which he must be freed along with the other Characters.

Zola is a male lion with peacock feathers as his mane and has four legs, claws, and a brightly patterned body.

He seems to be monarchy of the savanna, is very forgiving, gentle, and helps other characters. Due to limited appearances and dialogue, we do not know any of his true insights.

The King mentions him once. The monkey guide seems to be worried when you knock down one of Zola's creations and seems to be a go-to guy for him. Zola is forgiving for his creation destroyed by your Sackperson and senses you could help with the buffalo. When you free Zola in the lair, he mentions that you need to help everyone else. 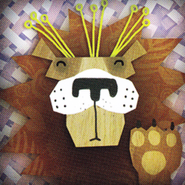 Zola on his throne