Magic Mouth
Uncle Jalapeño (pronounced Cala-peen-yo) is the Creator Curator of The Canyons. He teaches Sackboy how to use explosives, and helps chase Sheriff Zapata throughout The Canyons. He also drives Sackboy over to The Metropolis.

Uncle Jalapeño first appears in The Canyons level, Boom Town. According to Don Lu, he is the master of explosives. He appears to have befriended a man named Devante, who also knows a thing or two about explosives.

Afterwards, Uncle Jalapeño drives Sackboy over to the Metropolis to meet Mags the Mechanic in Lowrider. Mags gives Uncle Jalapeño a cooler new car because she thought that his was ugly.

In The Collector's Lair, you can free Uncle Jalapeño to get his prize bubble. He is freed by explosives lined along his cage.

Uncle Jalapeño makes a cameo appearance in LittleBigPlanet Karting level Serpent's Shrine and Mine The Gap. He can be seen in a minecart on a mine track in both of these levels.

In The Canyons area of Run Sackboy! Run!, Uncle Jalapeño hovers on the screen in a floating vehicle, holding a progress board to show the player how far they've ran.

Uncle Jalapeño cameos in a picture with Frida, Don Lu, and their baby in Bone-a-Fide Ride. He does not appear anywhere else, nor is invited to Sackboy's party.

﻿Uncle Jalapeño has a squeaky voice and has bones for arms. His head is a skull with quetzal feathers on the back of his head, and has a mustache as well.

Uncle Jalapeño is named after the Mexican pepper, jalapeño.

Uncle Jalapeño without his mustache. 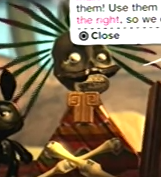 Uncle Jalapeño in picture with Frida, Don Lu and their Baby.