This page is about the character in LittleBigPlanet 3. If you were looking for the Toggle logic gate, see Toggle switch.

Toggle is a playable character in LittleBigPlanet 3. They are one of the legendary heroes of Bunkum, that can switch between a large and small form.

Sackboy is sent by Marlon to retrieve Toggle next, in The Ziggurat. In the temples of The Ziggurat, Sackboy meets the noble chief, Papal Mache. Papal Mache informs Sackboy about the location of Toggle's Marbles.

He sends them in search for the Marbles, in a runaway post service steam powered dragon train, where the marble replaces the eye of the beast, in the kingdom's furnace room, inside a shelter, where they're aided by a Yeti, and finally in a mysterious labyrinth in the kingdom's library. Once all the Marble are retrieved, Papal will insert them in Toggle's Statue, opening the door to his Sanctuary.

Papal and Sackboy set in search for Toggle, deep in the temple, and eventually find they, and they have no choice but to respond to the gang's call of duty. The three prepare to leave the sanctuary but, while passing through an old gate, they're separated by it, and, while Sackboy has to settle on their own, Papal and Toggle find their way out of the wrecking ballet stages that fill Toggle's Sanctuary. The two are able to escape, while Papal reminds Toggle how to use their abilities to escape. The two are finally able to get out the sanctuary and back into the temples, where Papal Mache directs Toggle, Oddsock and Sackboy on search for the last hero, Swoop, in Bunkum Lagoon.

As the three heroes make their way out of the Ziggurat Main Hall, they come across a scheming Newton, and unleashes one of the Titans, the Yellow Titan. The Titan starts to collect a series of chains and locks, interconnected to create a gigantic chain monster that attacks the gang as Newton escapes for the Creative Heart. Toggle, running through the libraries, distracts the chain monster until a large wall falls on it, destroying it. The three heroes set back into their way to Bunkum Lagoon, through one of Ziggurat's elevators.

Toggle is later seen inside of one of Pinky Buflooms bird skyrails. As she threatens to push them off, however, they're suddenly ambushed by Newton. He throws a bomb at them, throwing Sackboy out of the skyrail, only to be saved by Swoop, who awoken from her sanctuary--the sky. Pinky orders Toggle, along with Sackboy, to direct themselves to Newton's spider-hat robot lair.

They are then seen inside the robot, where they need to pull a switch in order to free Sackboy from their prison. After freeing Sackboy, the heroes witness Newton unleash the final Titan, freeing him from their control. Toggle fights the Titan monster, who has taken possession of a robot, by throwing bombs inside his mouth. After the Titan is destroyed, they and the other heroes and Newton sky fall into Bunkum Lagoon, however they're saved by Newton's father, Captain Pud, who was just roaming about with his air force.

Finally, they are last seen when Newton fixes the warp back to Craftworld again and they jump right in, as Newton, Nana Pud and Captain Pud wave goodbye.

Back in Craftworld, Larry Da Vinci and Victoria Von Bathysphere are preparing a party celebrating the heroes' honor for when they return. However, the heroes warp in sooner then expected, zapping through the yet to prepare party, accidentally taking Larry with them. They all land in The Wedding, where they divide into groups, Toggle's task being to find Frida, to bring her to the party.

Toggle follows Frida within the realms of her tombs, riding on her new railing system and helping Larry by searching for stamps that got warped across Craftworld with them. At the end of the level, Toggle proceeds to glue them to The Collector's invitation.

They all meet again at the party, where they enjoy their time with the guests and take photos with the inhabitants of Craftworld.

Toggle is a mythical hero with the exceptional ability of changing, or toggling, between two forms: Little Toggle and Big Toggle. However, their toggling abilities seem to go way farther them simple shape-shifting abilities. Big Toggle and Small Toggle are rather two beings in the same body, but can't coexist at the same time, seeing how they have different personalities and styles. It is unknown if they share memories, but it is rather likely that they do.

Toggle can be switched between their big and small counterparts for easy testing purposes, such as enabling mechanisms of sorts. Big Toggle is often seen as the 'default' form of Toggle.

Big Toggle is bigger and wider than the other heroes. Their overall shape resembles a pear and his skin is light beige, in a canvas like material. Their eyes are black flat beads and they have a wide mouth that is almost always smiling. Their legs are short but their arms are long with little fingers. Little Toggle's overall shape is a rectangle, with a rather flat head. Their face is mostly on the upper most part of their body, with two black flat bead eyes and a wide mouth. Their texture is canvas-like and a soft beige, and their arms are as long as their body is, with tiny legs. They are very small in comparison to most other characters.

Big Toggle is a caring soul, of rather silly reactions, and is, ironically, less mature than Little Toggle. Despite their clumsiness and short attention span, they seem to take interest in ballet. Despite their mostly harmless behavior, seeing how they are more pacifist than their counterpart, Big Toggle can still get annoyed if someone crosses the line (however due to their good nature, its usually ineffective). In contrast to Big Toggle's outgoing personality, Little Toggle is rather feisty and grumpy. They tend to get more physical and is the one out of the two that is more easily flustered.

"Big Toggle" is physically stronger than Sackboy, having the ability to crush mostly glass objects. In this form, however Toggle is apparently too heavy for Swoop to carry. "Little Toggle" can walk faster, walk on water, jump higher and crawl through very small spaces.

Sackboy and Toggle are now close friends and "colleagues" in their job of protecting the Imagisphere. The two are good team workers, but very little is known about their opinions on each other.

Toggle and Oddsock also used to be partners during the Titan era, before they got apart. Now that they're reunited, they're grateful to be cooperating together as a team.

Papal Mache seems to be, of all the Creator Curator and overall inhabitants of the Imagisphere, the one that's closest to Toggle. The two knew each other previous to the events of the closure of the heroes. it seems that Papal lent his temples; his undergrounds ballet studios, for the benefit of Toggle, as their sanctuary resting site. Additionally, there is a big statue of Toggle in The Ziggurat Grand Hall, proving their previous relationship. Additionally Papal knew where their Marbles were located, proving they had history together.

Toggle introduction in the trailer.

Toggle and Sackboy looking at Newton in the background. 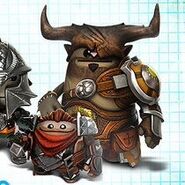 An example of a premium Toggle costume.
Toggle.jpg
Toggle and small Toggle. 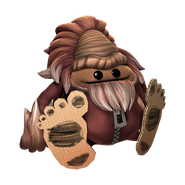 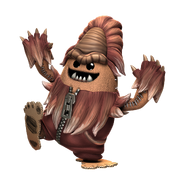 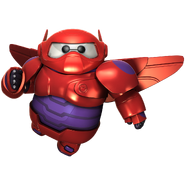 Alpha Toggle
Add a photo to this gallery

Retrieved from "https://littlebigplanet.fandom.com/wiki/Toggle?oldid=52637"
Community content is available under CC-BY-SA unless otherwise noted.