“ Long ago, before the Negativitron nearly laid waist to Craftworld, three gluttonous gargoyles gored on Bunkum's bountiful creativity. Inspiration dried up. We teetered on the brink of the abyss! And then... three Heroes came! With their speed! With their power! With their grace! ...they finally managed to capture the Titans. With Bunkum restored to the creative paradise you see around you, the Heroes retired to the pages of myth. A myth that also foretells of the return of the Titans. Tonight... Just before bedtime, all of Bunkum's nightmares will become real! And that's where I... I mean WE come in!" ”
— Newton

The Titans are the three end-of-world bosses (Not counting the mechanical guardian at the end of the Prologue world) that form the main trio of antagonists in LittleBigPlanet 3.

The Titans were once furry Shadowy Blob-like Creatures with horns and one eye in Newton's story, The Third Titan has monstrous horns and a purple eye, the Second Titan appears to be bigger then the two, with tiny horns and a yellow eye, and the First Titan appears to have Crab-like Claws, and a Green eye. and after they were defeated, they became Glowing Orbs.

During their second uprising, all three posess Newton and take over his form, however, each is released with every encounter with Sack-Thing. The Green Titan takes over the form of a swamp monster, created from a cluster of set pieces and props from MangleWood. The Yellow Titan posesses two gigantic sentient link chains, that act as serpents destroying all in their path. The Purple Titan takes over Newton's gigantic bowl hat robotic creation.

The three Titans, described as gluttonous gargoyles, are told to have been terrorizing the planet of Bunkum way back before The Negativitron's rampage. They would feed on the creativity and imagination of the Bunkum citizens, pumped by the Creative Heart, inside Bunkum. However, their feast is stopped with the rise of the three Bunkum heroes: OddSock, Toggle and Swoop. Together, they defeat the titans, and capture their weakest forms inside the Titan Tea Tin, which was kept in the Stitchem Manor, the residence of the ilustrious inventor Captain Pud, under his wife, Nana Pud's supervision.

Newton, Captain Pud's unsuccessful son, created a plan to release the Titans and use the creativity they'd globbed up during their reign of terror and unleash it to the world, for useful purposes. He recruits Sack-Thing and tricks him into breaking into the Stichem Manor, telling him of a prophecy that told of the return of the Titans, and of a witch that had stolen the Titan Tea Tin and had plans to release them. They're successful, though Newton is exposed by his mother, too little to late, as he's the one to open the Titan Tea Tin and release the three Titans, in their Glowing Orb form. He was hopeful they would listen to him, but they turned against him, possessing him, thus creating Evil Newton. 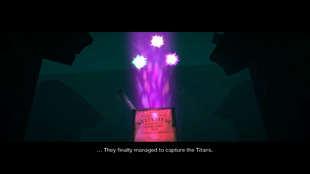 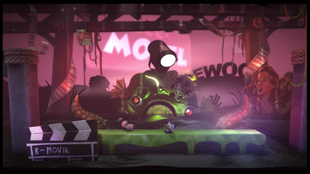 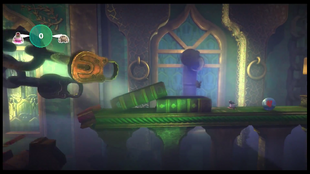 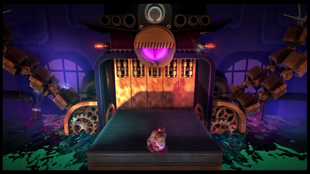 The Third Titan
Add a photo to this gallery

Retrieved from "https://littlebigplanet.fandom.com/wiki/Titans?oldid=52342"
Community content is available under CC-BY-SA unless otherwise noted.