LittleBigPlanet Wiki
Register
Don't have an account?
Sign In
Advertisement
in: Articles in need of images, Story characters, The Gardens,
and 10 more

Magic Mouth (Queen)
The Queen is the Creator Curator of the Tutorials rather than an actual game world. The Queen is married to The King, and appears throughout The Gardens and the level creation tutorials. Her role is relative to Dumpty's, as an informative character for the player along the three first levels. The Queen also has one sound file which is accessible through the Magic Mouth.

She can be earned as an item in the level The Collector's Lair.

In LittleBigPlanet, The Queen is the Creator Curator of The Tutorials. She also helped The King to build The Gardens. She is also seen the Creator Pack 1 and the water creator tutorials that come with the Pirates of the Caribbean Premium Level Kit.

She is one of the many characters kidnapped by The Collector, and can be rescued from her cage (along with the King and two Wooden Steeds) in The Collector's Lair.

The Queen is the first Curator Curator of the game.

In LittleBigPlanet 3, The Queen makes a small cameo in The Great Escape, as a miserable robot replica.

The Queen makes a minor appearance in The Journey Home. She is seen mostly beside The King, and does not speak.

The Queen in Patients are a Virtue.

an audience in Get a Grip that bears resembles of The Queen.

Early design for the Queen 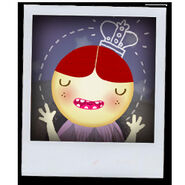 The Queen on the Creator Pack 1 badge.

The Queen in The Great Escape level