The Negativitron is the primary antagonist and the final boss in LittleBigPlanet 2. The Negativitron appears as a giant inter-dimensional vacuum cleaner and as such is usually seen sucking everything and anything into its swirling portal mouth.

Not known much of his origins of his existence, but it's been believed that the Alliance created him based on their negativity

In the beta versions of LittleBigPlanet 2, the Negativitron was originally called "The Sucker", and resembled a vacuum cleaner more than anything else, and had two eyes (the eyes were meanie eyes instead of the evil magic eyes used in the final game) and there was only 1 vacuum segment.

The final version of the Negativitron is a four-eyed serpent, with a much more menacing appearance and 2 vacuum segments. Its teeth are actually modified versions of the Decoration "Meanie Horns", which is also used on the Meanie enemies. When it opens its mouth, a swirling neon pink vortex is seen, which seems to continue on forever. It also has two horns, and the ability to shoot energy blasts from its mouth.

Past the serpentine appearance, the Negativitron has a planet body made out of junk and scrap metal, with red metal structures not unlike those in The Factory of a Better Tomorrow, implying that he sucked them up, deeper in the fiend is a layer of green blocky material, which appears to have little gravity if the floating blocks mean anything. The final layer appears to consist of tunnels made out of modeling clay, within the center is a green box with an orange lid, which hides the heart of the Negativitron, it is pink and has various veins connecting to the rest of the box. Transparent clusters full of creativity are scattered around the inside of this box, entangled within amorphous, blob-like substances similar to plastic wrap.

Though the Negativitron can be seen in many forms during the course of the story mode, its default form is comprised of:

His name is a play on the word "negativity" and "tron" (creation), referring to what he represents as a creation of negativity. 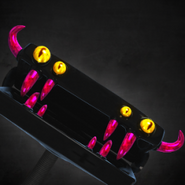 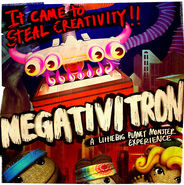 The Negativitron's heart
Community content is available under CC-BY-SA unless otherwise noted.
Advertisement