The Meanies were evil forces created by the Negativitron out of Sackbots, cakes and other entities, and the most common enemy in LittleBigPlanet 2.

In Victoria's Laboratory, the Negativitron created the first meanies out of cakes. These were fairly primitive enemies that would hop in the air.

There was also a larger, more humanoid meanie with a top hat and mustache who was a minor boss of the level Runaway Train. The Brainwave Machine was the last of them, being hijacked to create meanies before becoming sentient and being the main boss of Victoria's Laboratory.

The Factory of a Better Tomorrow

In the Factory of a Better Tomorrow, Victoria's sackbots have been brainwashed by the Negativatron to be turned into Meanies. Sackboy somehow stops the hypnotism but they are terrified of Sackboy and flee from him. After going through a tube like contraption, they realise that Sackboy was saving them. There are spider like meanies that have a microphone on their backs and they fling fire. Probably the most prominent meanie is Copernicus the Guard Turkey.

Avalonia is the first area to show the most commonly known type of meanie; a sackbot stickered red with the meanie's eye decoration and two meanie horns- curved. They are seen in Flying in the Face of Danger and Huge Peril for Huge Spaceship piloting spacecrafts. Meanies invade Avalon Centrifuge's training center in Got the Hump but are repelled by the camel spit from the camel Sackboy is riding.

The Meanie infection makes its first and only appearance here. The infection has drove various creatures and people insane. You go inside Dr. Herbert Higginbotham's body and eradicate the infection, only to find that Dr. Higginbotham is insane anyway.

This is where the meanies play their most important role. The only levels they don't appear are Set The Controls For The Heart Of The Negativitron and Into The Heart Of The Negativitron. There are more mechanical looking meanies made with red panel, they are defeated my shooting their weak spots, which appear to be meanie slime. There is also a very large and humanoid robot meanie made of red panel that has captured Avalon. To destroy it you must pop its many brains. There are other meanies that can only be destroyed with robobuns that apear in Full Metal Rabbit.

Move Pack: Rise of the Cakeling

The Cakeling which is one of the remaining Meanies is a Cake Meanie that was incased a glass by Victoria von Bathysphere presumably after the events of LittleBigPlanet 2, The Cakeling managed to break free and acquire the Brain Crane, Victoria's latest creation, then the Cakeling went on a rampage capturing Sackbots and Victoria, this meanie then was destroyed by being pushed into a oven by Sackboy. This Meanie is probably one of the most powerful Meanies after the Negativitron's defeat although this is only because of the Brain Crane. 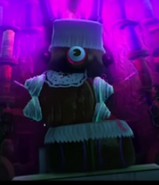 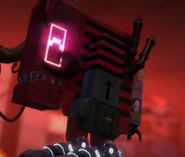