“ You must love jumping just as much as I like animal-shaped cheese crackers! ”
— The King on OddSock's second visit.

The King is one of the Creator Curators who rule, rebuild and maintain the world of LittleBigPlanet.

He is, unsurprisingly married to The Queen and his domain is The Gardens, where the first series of levels in Story Mode take place. In these levels he tells the player different ways to play the level and helps them along their path.

The King has two different sound files which are King (Informative) and King (Jolly). These sound files are available through the item called the Magic Mouth.

The King is the first character encountered in The Gardens, the first theme of the game. Here he welcomes Sackboy and sends him on his way.

The King can be found at Eve's Asylum﻿ along with other characters from the first LittleBigPlanet game. Although showing no signs of a physical infestation of Meanies, like Dr. Herbert Higginbotham, it is possible he was there to cure him of the Meanie Virus.

The King appears in the opening cinematic where he is being Taken by The Hoard, but appeared in the tracks in the Gardens. The Queen mentions that ever since The King was released from Eve's Asylum, he wanders around sometimes. he was shown in Hoard Sweet Hoard. The King can also be obtained as a picture frame and an object.

The King can be seen in Swoop's portion of The Great Escape in Bunkum Lagoon. This time, he is shown to be mechanical, as if Newton tried to recreate him. This version wears Newton's bowler hat instead of a crown and wears purple clothing along with the eyes being screws. He appears to jump around, sometimes making mechanical, broken versions of his voice. This version of his voice can be used as a sound effect in Create Mode.

The King reappears in to guide OddSock and gives them the Springinator, and also destroys the ghost mini-boss for them.

He is later seen at the party fully welcoming the Heroes back on Craftworld . he also appears on one of the party pictures where he looks disoriented while Sackboy and a small Toggle happily standing on his shoulders.

In Get a Grip

Early design for the King. 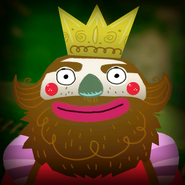 the early version of the King photograph that is now used as the icon for an achievement.

In Patients are a Virtue 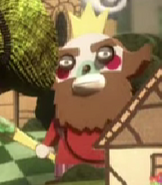 in the opening cinematic of LittleBigPlanet Karting

The King getting taken away by a member from The Hoard

In The Great Escape

In Spring Time in the Gardens 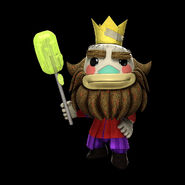 Costume from LittleBigPlanet 3: The Journey Home 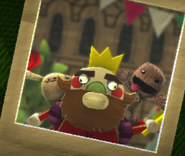 In the Seaside Surprise Level Kit 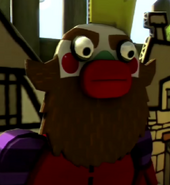 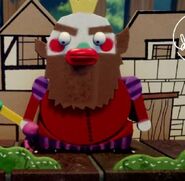 In Dreams, as part of LBP's 10th Anniversary by Media Molecule

Along side Dumpty in the early version of Dreamscape.
Community content is available under CC-BY-SA unless otherwise noted.
Advertisement