The Great Magician is the Creator Curator of The Temples, and the master of the Emitters.

At the beginning of the Great Magician's Palace, he challenges Sackboy to go through his palace of emitters, to face Sackboy's greatest challenge; The Wilderness. Later in the level, he performs the "magic box trick", which is basically a box that reveals different shapes that are on fire, except for a cyan square. At the end, he uses his magic to teleport you to The Wilderness in order to stop The Collector.

You eventually free him from in The Collector's Lair.

You unlock The Great Magician's Box Trick in the end of Great Magicians Palace where you meet him, pull the green sponge like square out of his box when it appears and use it to jump up on top of his head where you get his prize bubble.

You unlock The Great Magician by freeing him in the The Collector's Lair, and beat the level.

The Great Magician is a blue man, with a small goatee, along with a green turban, a yellow-and-orange sort of cape, and tiger patterned pants. 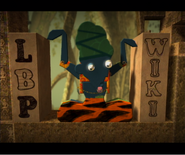