LittleBigPlanet Wiki
Register
Don't have an account?
Sign In
Advertisement
in: Articles in need of images, LittleBigPlanet PS3, Creator Curators,
and 17 more

For the level, see The Collector (level).

He first appears early in the game disguised as Dumpty in Skate to Victory and peeks in through a window in the haunted castle. He later appears in The Meerkat Kingdom disguised as a Meerkat in the VIP room at the nightclub. However, his most obvious appearance is when he comes to swipe Don Lu's Dog in The Darkness in his pod, which he uses for his captures from that point onwards. He appears once again in Boom Town, where he abducts Frida and Don Lu during their honeymoon. He then appears in Subway, carrying Ze Dude, and then again at the start of Endurance Dojo, carrying away a lot of sushi and a doll. His final appearance before The Wilderness is in The Dancer's Court where he kidnaps one of the dancers.

He kidnaps many characters throughout the game, and eventually has all the other Creator Curators and the majority of the other non-player characters captured and locked in The Collector's Lair. Sack-thing goes to rescue them and frees them all before taking on The Collector in the level of the same name. The Collector tries to defeat Sack-thing with his powerful robotic devices but in the end is cornered. His robotic armor damaged beyond repair. There he openly confesses that he only stole things because he was jealous that he didn't have any friends to share his creations with. The King suggests that the rest of the LittleBigPlanet community can be his friends and he seems to agree, ultimately forgiven for his criminal ways.

The Collector and many other LBP characters appears once again in LittleBigPlanet 2, where he is shown to be holding a balloon in Eve's Asylum. He appears to be hard to identify as a black mask covers his face, but the laugh and shape are an obvious hint.

The Collector reappears twice in the LittleBigPlanet 3 story mode.

His first appearance is in the Introduction level, where he is shown in the audience behind a tutorial board, while smiling.

His second appearance is in The Great Escape where he is shown on top of a few boxes in OddSock's part. He appears to look similar to the Introduction level, but his face is a Magic Mouth, has a purple glowing eye in place of his left eye, and wears Newton's bowler hat.

The Collector also makes an appearance in the DLC, as one of the characters you must send a letter to.

He later appears at the party where Larry Da Vinci asked him if he didn't bring any "instruments of destruction" with him. he also appears in one of the party photographs where OddSock watched a small Toggle lift him from his toes.

He also makes a cameo appearance in the Seaside Surprise Level Kit, as a puppet at the beginning of the level. He is frowning, as a puppet of The King is hitting him on the head.

The Collector is a tiny character fully made out of cardboard material. He has four miniature limbs. His body ceases to lack actual design, with the exception for his face. His face consists of two eyes and a Magic Mouth. Likewise, he also has pitch black gear stickers behind his eyes which possibly might serve as a cosmetic contour, and thick eyebrows.

The Collector is a small, menacing, envious character who was determined to steal the other Creator Curators and their friends and become the ruler of LittleBigPlanet. It can be assumed he used to be a peaceful Curator for such a thing not to have happened before, but his loneliness and envy for the other Curator's creations must have led him to seek dominance over the planet and create dangerous animals and a stronghold.

The Collector was named after what he did as the antagonist in LittleBigPlanet, collect things. 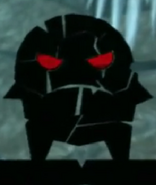 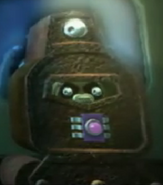 The Collector in his Pod. 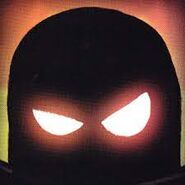 The collector looking way more sinister in The Wilderness Icon

The Collector as a meerkat.

The Collector hiding under the statue of himself after you defeat him.

Early world icon for The Wilderness, with the collector having a completely different design. 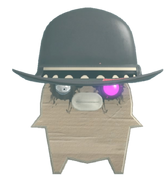 The Collector as he appears in The Great Escape.

The Collector at the party.

In one of the photographs in The Journey Home
Community content is available under CC-BY-SA unless otherwise noted.
Advertisement