The background of The Canyons in LittleBigPlanet Karting

The background of The Canyons in LittleBigPlanet

The Mask of Tezcatlipoca (English pronunciation: /ˌtɛzˌkætliˈpoʊkə/; was a central deity in Aztec religion, and his main festival was the Toxcatl ceremony celebrated in the month of May. One of the four sons of Ometeotl, he is associated with a wide range of concepts, including the night sky, the night winds, hurricanes, the north, the earth, obsidian, enmity, discord, rulership, divination, temptation, jaguars, sorcery, beauty, war and strife. His name in the Nahuatl language is often translated as "Smoking Mirror")) 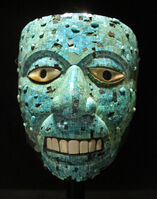 The Mask of Xiuhtecuhtli (also exhibited in the British Musem; English pronunciation: [ʃiʍˈtekʷt͡ɬi]; In Aztec mythology, Xiuhtecuhtli ("Turquoise Lord" or "Lord of Fire"), was the god of fire, day and heat)

The Double-headed serpent (this is an Aztec sculpture kept at the British Museum. Composed of mostly turquoise pieces applied to a wood base, it is one of nine mosaics of similar material in the British Museum; there are thought to be about 25 such pieces from that period in the whole of Europe. It came from Aztec Mexico and might have been worn or displayed in religious ceremonies. It is possible that this sculpture may be one of the gifts given by the Aztec emperor, Moctezuma II, to Spanish conquistador Hernán Cortés when he invaded in 1519. The mosaic is made of pieces of turquoise, spiny oyster shell and conch shell) 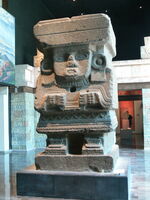 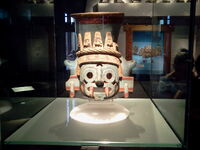 This vase represents Tlaloc (Classical Nahuatl: Tlāloc [ˈtɬaːlok]). He was a member of the pantheon of gods in Aztec religion. As supreme god of the rain, Tlaloc was also a god of earthly fertility and of water 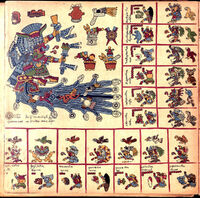 The 5 page of the Codex Borbonicus 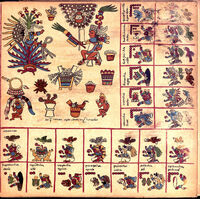 The 8 page of the Codex Borbonicus 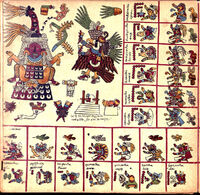 The 13 page of the Codex Borbonicus 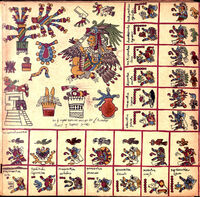 Retrieved from "https://littlebigplanet.fandom.com/wiki/The_Canyons?oldid=53347"
Community content is available under CC-BY-SA unless otherwise noted.