“ Aww bless... You're quite a cute one! ”
— Narrator in the Introduction (LittleBigPlanet)

Sackboy is the default protagonist of the LittleBigPlanet series of games. His kind consists of small entities called Sackpeople, Sackfolks, Sacklings, or Sack Things, all of which are cuddly, creative and curious in their own ways, and they inhabit the Planet Craftworld.

Sackpeople are made out of various cloths (mainly brown knitted wool) and stuffing, with stitches clearly visible, and have a large zipper down the front of their chest. Sackpeople have black button eyes and a pink Tensoplast tongue. They are stuffed with fluff, and also mentioned to be stuffed with ice cream, too. Another defining part of the sackperson is their unusually large head, as described by Gerald Strudleguff.

Sackpeople are customizable, with their skin, facial features, and attire being changeable. Stickers and Decorations can also be attached to a sackperson.

Along with the Costumes originally included in the game, there are also costumes that can be bought on the PlayStation Store, many of which are cameos of characters from other video games.

Appearances in other games

Main article: Sackboy in Other Media

Sackboy looking at the player. Probably from the player trying to put stickers on him

Sackboy looking left. also probably from the player trying to put stickers on him 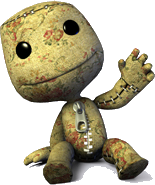 Sackboy From The EDGE Magazine Issue 174 of Apr 2007. Note that is material is different, and his zipper is rounded and more plastic like 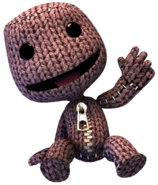 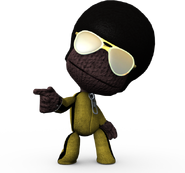 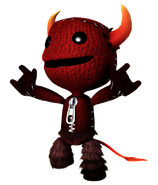 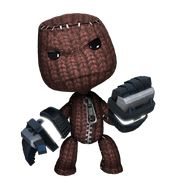 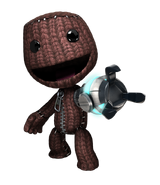 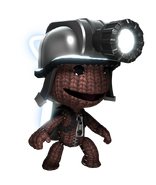 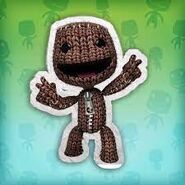 Sackboy as a PS4 avatar.
Community content is available under CC-BY-SA unless otherwise noted.
Advertisement