LittleBigPlanet Wiki
Register
Don't have an account?
Sign In
Advertisement
in: Articles in need of images, Creator Curators, LittleBigPlanet 3,
and 8 more

“ You don't expect your queen to carry for you, I hope? You have a grab button just like anyone else! ”
— Pinky Buflooms complaining at Swoop

Pinky Buflooms is the Creator Curator of the Bunkum Lagoon, who is a character in LittleBigPlanet 3. She refers to herself as the queen of Bunkum, and Protector of the 'Creative Heart'.

She resembles a puppet. She wears a masquerade and a jester type hat with a big pink rose on it. She wears a very extravagant dress with feathers and is very royal like.

Pinky Buflooms is the Creator Curator of the Bunkum Lagoon, as well as 'queen', seeing how she presents herself as such. Additionally, she's the protector of the 'Creative Heart'.

After Newton stole the Creative Heart, she claims that she has lost her temper. In fact, she acts in an hostile manner to everyone around her, making threats and insulting people, like Sackboy, Newton and Swoop. She is very clean and hates disgusting environments (as seen in Belly of the Beast), one to get annoyed extremely easily, and a flamboyant marionette who's full of herself, yet able to recognize others achievements and be grateful about it. 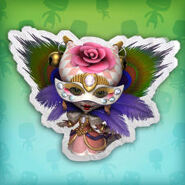 Pinky Buflooms as a PS4 avatar.