Papal Mache is the Creator Curator of The Ziggurat.

Sackboy encounters Papal in The Ziggurat, where he is worried because he keeps forgetting things. He says that he had a brilliant idea to get all of Toggle's Marbles faster, but he forgot, so Sackboy has to take the long way. After Sackboy retrieves the three marbles-with a little help from the yeti and the Hook Hat, Papal accompanies Sackboy and Oddsock into Toggle's temple, where he asks Toggle to show off his abilities. After being separated from Sackboy and Oddsock, he helps Toggle make his way back to the Ziggurat, and says farewell.

He then reappears to congratulate Toggle for defeating the Yellow Titan, and sends the heroes to Bunkum Lagoon. He tells them to hurry before Newton does something crazy like building a fortress with his face on it, not knowing that he has already done just that. He also tells them to get him a funny hat souvenir, if they have time.

Papal Mache is a bulky sack-person, with a light-bulb shaped body, long arms with chunky hands and short legs. His eyes are small and far apart, with blue patches of felt sewn under them. He has a blue bead as a nose , with two green jewels as a moustache, and a long cascading beard of hexagon shaped jewels. He's has two big bushy bright yellow segments of hair, that is mismatched in shape and size, implying its parted to the side.

He's wearing a long robe that covers him down to his legs and up to his eyes. Its golden with a brown pattern, and cut-out squares of golden card on the ends of the torso and sleeves. He also wears a sort of papal headdress, consisting of a hat piece, in a sharp oval shape made of card, with a green spot over, and a hexagon shape cardboard cutout, glued vertically to the hat, with golden card cut-out in triangles, resembling light coming from his head. Finally he wears a small ring made from a bead and a twisted iron rod, and sometimes sports a green and white striped silly-straw.

His outfit can be owned once you complete On The Link Of Disaster.

Mache seems to be somewhat of a pope figure to the population of the Ziggurat, and may even considered being the chief, referred likewise by Marlon Random, and evidenced by his staff.

However, he isn't of very regal attitude and is instead playful towards Sackboy, with constant attempts at humour through puns and jokes. This doesn't mean that he cannot be wise, as usually he makes the most of his rather limited vocabulary, by expressing himself with wise words. He seems to have several attention span problems, as he constantly forgets about stuff and gets distracted easily, with trivial things, while in the face of danger.

He does however care much for his people, expressing sorrow on the fact that the population of The Ziggurat has been drained of its creativity by Newton.

Papal means 'Pope' in Italian. His name is also a pun on the paper-based material use commonly in arts and crafts, "papier mache".

A snow sculpture of Papal Mache in front of Zom Zom's shop. 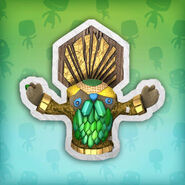 Papel Mache as a PS4 avatar.