“ Back off! You wouldn't want your little chum to get vaporized, would you? ”
— Newton, in The Heroes Finally Defeat Newton... Oh

Newton is a major character in LittleBigPlanet 3. He is voiced by Hugh Laurie.[1] Despite his friendly nature in the prologue, his desire to improve Bunkum's creativity through the use of the Titans leads to him betraying the player and becoming possessed by the Titans.

Newton is first seen at the end of the game's introduction level as he transports Sackboy to Bunkum, where he informs the player of Nana Pud's "evil plan" to bring back the three Titans. Afterwards, he guides the player through Needlepoint Peaks and Newton's Airship, where he explains the basics of the game and the use of the Pumpinator.

In the level Tinpot Towers, after stopping Nana Pud's guardian, Newton reveals that he had tricked Sackboy into helping him release the Titans, and that Nana Pud is actually his mother. He then releases the Titans, planning to use them for the creative benefit of Bunkum. However, they possess him, and intends on destroying Bunkum instead.

During each encounter that follows, Evil Newton unleashes 1 of the 3 Titans to attack the player. Shortly after releasing the last Titan, Newton regains control of his body. He is then seen riding a small boat with Sackboy at the near end of the boss level.

Upon returning to Stitchem Manor, Newton remakes the Dimensional Doorway, allowing Sackboy—accompanied by Oddsock, Toggle, and Swoop—to return to Craftworld.

Newton shares a similar physique to that of a Sackperson, but instead has a large light bulb as a head. He wears a bowler hat that appears to be an egg timer, along with a purple cotton jacket, a magenta undershirt with pants, and black boots with cardboard soles.

His facial "filaments" were originally orange, but when possessed by the Titans, they became purple.

Newton seems to be very foolish and not very smart. Despite this, he tends to accept unearned credit and even comes off as a bit narcissistic at times. He often makes excuses and lies, such as tricking Sackboy into attacking Nana Pud, when in realty his plan was to release the Titans himself. After beating the third Titan, Newton meets his father again. When confronted, he pretends he didn't know releasing the Titans was a "strict rule", much to his father's anger. He claims he was the "Brave Leader" during the fight for placing the explosive device in the guts of the third Titan. Nearing the end of the cutscene, Newton attempts to twist the story in his favor.

Newton might have been named after Isaac Newton, a famous scientist, physicist, and mathematician that invented calculus and most importantly, worked heavily on light. This would be ironic though, so it is also possible that he was named after newtons, a measurement of force.

Due to Captain Pud & Nana Pud being his parents, his full name is Newton Pud. 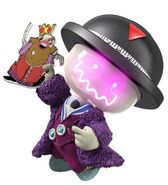 An early render of Newton 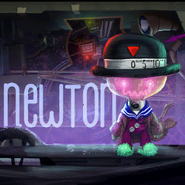 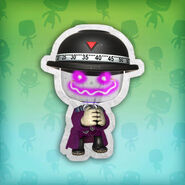 Newton as a PS4 avatar.