LittleBigPlanet Wiki
Register
Don't have an account?
Sign In
Advertisement
in: Articles in need of images, Female Characters, Story characters,
and 7 more

“ Didn't you learn to knock? ”
— Nana Pud when Sackboy goes inside Stitchem Manor

Nana Pud is a character from LittleBigPlanet 3 and lives in the Stitchem Manor, Bunkum and is the guardian of the Titans. She is Newton's mother. She is the Creator Curator of Stitchem, or the Prologue.

When Newton explains his plan to Sackboy, she is displayed as an evil witch who seeks to release the three Titans, and Sack-Thing is sent to stop her. When the two reach Stitchem Manor and Sackboy explores the mansion, Nana Pud attacks him with a pan robot. However, after Newton and Sack-Thing reach the can where the Titans are locked in, it is revealed that she attacked Sack-Thing because she thought he was trespassing, and is not evil at all.

After Newton departs, she insists that Sack-Thing gather up the three heroes of Bunkum, and save Newton from himself.

She then takes Sackboy via boat to Manglewood, and tells him to find Marlon Random, introducing him to the Organizitron. During the whole mission, she waits patiently in her pan boat.

Nana Pud is a large creature who appears to be hunched over. Her head is a coin purse and her body seems to be a plushie, with stitches and papers sticking out of her arms with oven mitts on her hands. She has purple hair that seems to be made of inside out purple velvet from inside the purse and huge maroon bags under her eyes, as well as red lipstick and a wide mouth.

Nana Pud is a woman who loves cats, and loves her son, Newton. She is short tempered and makes quick conclusions. Rather aggressive towards most people, except her son, and has little patience for mistakes and wasting time.

Her name is a shortening of a type of pudding, banana pudding.

Newton is Nana Pud's son. She loves him to the point that even when he betrays them all, she insists that he would never hurt anyone as he doesn't know any better.

She seems to be a bit hard on Sackboy, as she blames him for Newton's current corruption. However, when Sackboy returns to Craftworld, she seems to be grateful that he saved Bunkum and her son.

Captain Pud is supposedly her husband. Not much is known about their relationship. 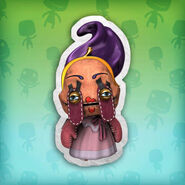 Nana Pud as a PS4 avatar.

The icon used for the special Nana Pud Costume. 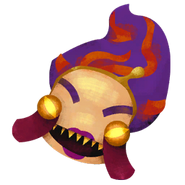