Marlon Random is the Creator Curator of Manglewood. Marlon has gone a bit crazy after Manglewood became a swamp, and is obsessed with movies and film.

The player encounters Marlon in Manglewood, who tells Sackboy that after the three heroes defeated the titans, who then lack motivation, and lost their marbles. He, fortunately, knows where Oddsock's are, and assists the player in retrieving them, as well as supplying the player with the Blink-Ball. After getting the marbles, he accompanies Sack-Thing into an old movie set, where they encounter Oddsock. After Sackboy is separated from them, Marlon assists Oddsock in getting them both out of the sticky situation. After the player defeats the green titan, Marlon appears to congratulate them, and sends them to a lift into the Ziggurat.

Marlon Random has the body of a sackperson with a rugged shirt, blue jeans, and white gloves. His head appears to be a cylindrical part of a film reel with the text saying "Color Film". His hair is old fashioned film, styled like Elvis' hair.

He is, according to Nana Pud, bonkers, as he resides in the swamp, but it used to be Bunkum's most thriving film industry. As a result of this, Marlon believes his life is a movie, and everyone around him are his co-stars. This does not make him arrogant, however, as he gladly takes a co-starring role to let Sackboy and Oddsock take the spotlight.

His name appears to be a reference to Marlon Brando, a famous actor, mostly known for his role in The Godfather. 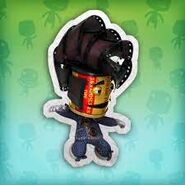 Marlon Random as a PS4 avatar.
Community content is available under CC-BY-SA unless otherwise noted.
Advertisement