“ Jalapeño, my man! That's one ugly ride! go to my garage in the scrapyard and I'll give you a cooler one. ”
— Mags upon Sackboy's arrival.

Mags the Mechanic is the Creator Curator in charge of The Metropolis and a friend of Uncle Jalapeno. She seems to enjoy building cars and owns a construction site.

Mags gives Uncle Jalapeno a new car upon his and Sackboy's arrival, in Lowrider. Eventually, Sackboy has to help to retrieve her car from Ze Dude, whom he races at the end of Lowrider.

In the level The Construction Site, Ze Dude appears to be trashing her construction site, so she asks Sackboy to help stop him.

She is much more humanoid than most other characters in LittleBigPlanet, appearing as a slim young woman with puffy, blonde hair who wears blue denim dungarees and she has no feet.

Mags may have been named after a member of Media Molecule, Mags Hardwick. 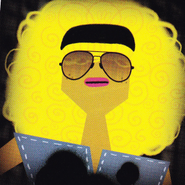 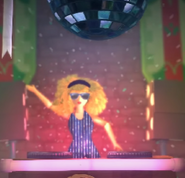 Mags as a DJ in The Journey Home