LittleBigPlanet (also known as LBP) is a puzzle platformer game for the PlayStation 3, developed solely by Media Molecule and published by Sony Computer Entertainment Europe. LittleBigPlanet allows players to create and share their own levels with other players using the items found in Prize Bubbles that are scattered throughout the Story mode & in-game tutorials. The game was first announced on 7 March 2007 by Phil Harrison[2], and then later released on 24 October 2008 in North America, however, due to lyrics in a song featured in the game, it was recalled and the song was replaced with its instrumental.[3] The updated version of the game was released on 27 October 2008.

The game received critical acclaim and has been praised for its presentation, including its graphics, physics, and audio, along with its gameplay and large array of customisable costumes and online features. Additional praise was given to its scope and future potential based on user-created content; minor criticism was reserved for specific elements of the gameplay mechanics and level creation facilities. LittleBigPlanet has won a number of awards. A PSP version of the game was released in November 2009, featuring a new Story mode. The game was offered by Sony as a free download as part of their 'Welcome Back' program, following the PlayStation Network outage of 2011. A sequel, LittleBigPlanet 2, was released in 2011.

Throughout the magical land of LittleBigPlanet, the sinister Collector is stealing characters and their creations! It's up to Sackboy to stop him, and rescue the Creators!

In LittleBigPlanet, players get to control a fully customisable Sackperson (often known as Sackboy). This Sackperson is controlled with the left analogue stick that lets them move left or right and between the 3 layers. Like many games players jump with the X (cross button) and can grab objects using the R1 Button.

Throughout the game players pick up Costumes, Objects, Materials, Stickers, Decorations & Tools, which can used in the game's Create Mode found on the player's own "Moon". Some of these items like stickers can be placed in the main levels or on the Sackperson.

Players navigate their way through the levels by jumping, pushing, grabbing, running to overcome numerous puzzles and encounter physics-based enemies ranging from the small such as burning logs, to big "bosses" built around one of six AI "brains" available in the player's create mode toolset.

The Music Player was added in one of the updates. It allows players play MP3-formatted music from their PlayStation 3 system. The music plays in the Pod and in Create Mode, but not in Play Mode.

All objects and surfaces can have "dangers" applied to them. Any object can be set on fire, electrified, or turned to gas and the character will react differently when it comes into contact with each of them. Fire will singe the character if it is touched briefly but he will die if in contact with it for a longer period. Electrified items will electrocute the player and kill immediately. While gas is also lethal, and is generally the hazard found at the bottom of bottomless pits. Explosives are also to feature in the game. The player can also be crushed if trapped under or between heavy items.

Objects are made of many different, selectable materials, such as felt, wood, metal or sponge. The materials act realistically; wood does not change shape when you stand on it or grab it, while felt "squishes" and deforms. Objects are selectable from a pull-out menu, nicknamed a Popit, accessible at any point during play.

Usable items are not limited to physical objects; from the Popit menu "stickers" are also selectable. These "stickers" are pasted to any object or wall throughout the world, limited only by the player/level creator's imagination. The stickers can be created from photos taken from the PlayStation Eye.

A resource system is also in the game, where sponge and other items are collected by the player in order to fuel their ability to build new objects.

Players can jump, move, and grab objects by using the controller. The analogue sticks are used for movement and camera control during the game, but may also be used to move a characters' arms by pressing a certain button to swap between functionality. The head or body can be moved by using the Sixaxis tilt control. Pressing the left stick will change between moving the head and moving the body.

Character movement is based on how hard the controller is used, much like pressure sensitivity; for instance, when the L2 or R2 triggers are held (for the left and right arms respectively), jerking the analogue stick will cause the player to slap another player inside the game.

Grabbing is also a key ability (L1 or R1 triggers); it allows a character to pull an object, or even another character, in whatever direction they are currently moving. This allows, for example, a chain of players to hang off a rope when only one character is actually grabbing the rope. Also, it allows a jetpack-equipped player to carry other players through the sky. this neat feature in the games is also used to solve puzzles and you can even create a sackboy ladder just for the heck of it. however this is somtimes required to solve certain puzzles.

Emotions are also a controllable aspect of the characters. Aside from the normal expression the player's avatar exhibits, the player also has a choice of four different emotions to show, each emotion triggered by pressing a directional button on the controller's D-pad. Starting from the upward directional button and going clockwise, the emotions are as follows: happy, angry, sad, and nervous. Each emotion has three different levels of intensity, the emotion growing more intense with each consecutive press.

Create mode allows the player to dynamically place, edit, morph, rotate and interact with objects within the game world. The tactile design of the objects and materials available react as at the player would expect when under game physics. Objects can be made out of glass, metal, sponge, polystyrene, cardboard and rubber. More complex items can be built using these materials in conjunction with glue, bolts, string, rods, springs, elastic, winches and pistons. Players will also have access to a range of pre-made objects, such as vehicles, which are shipped with the game, or user-created objects which can be given as rewards by the creator for completing his or her level. The user can obtain new objects and materials by collecting the Prize Bubbles placed throughout the pre-made levels.

The player may place stickers onto the objects in their level. These stickers can be images included in the game or photos taken using the PlayStation Eye camera. From here, levels can be uploaded onto the game's servers where other players can download, play, and edit them.

The player may customize their character in a range of ways. They are able to select a base color and texture for their Sackboy from a range of materials and designs. They are also able to create items for the character to wear such as masks and clothes as well as give them pre-made items including swords and capes.

LittleBigPlanet features a range of multiplayer options. Levels can be played online with up to four players, locally with up to four players or with a mixture of up to four online and local players. Up to four local users can play together in Create mode, and can also use external devices, such as keyboards and microphones to communicate more easily.

Each local player will also be able to sign in to their own PlayStation Network account and individually collect trophies for their own account. This is the first time such a feature has been included in a PS3 game. 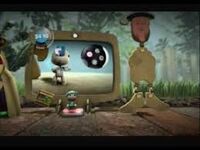