The Factory of a Better Tomorrow

Da Vinci's role in the second game is as the leader of the Alliance, whose main goal is to defeat The Negativitron. At the beginning of the game, he saves the player from being sucked up by the Negativitron. He tries to explain the Alliance's goal, but keeps getting interrupted by Avalon Centrifuge. After Avalon leaves, he proceeds to introduce the player to their Pod.

Da Vinci is the Creator Curator of the first theme, Da Vinci's Hideout, where he trains Sackboy to join the Alliance.

He accompanies Sackboy throughout the mission to save Craftworld, and appears in all the game's themes except Eve's Asylum.

In the final battle against the Negativitron, he supplies the player with cake in the third and final stage, along with Victoria von Bathysphere.

He re-appears as a Tutor at the Popit academy in LittleBigPlanet 3, where he teaches the player how to use the basic Create Mode tools. He serves as your Popit Tutor for the first term, while Victoria teaches during the second term.

Da Vinci makes a cameo in LittleBigPlanet 3's Introduction. He can be seen in the audience behind Sackboy during the "Acting" tutorial, next to Victoria.

Additionally, a giant robot replica of him can be seen in the background of the LittleBigPlanet 3 level The Great Escape. Blueprints of him also appear in the level, and can be obtained as a sticker.

He re-appears again in the level pack LittleBigPlanet 3: The The Journey Home. Two hours after Sackboy and his new friends defeat the Titans, he and Victoria von Bathysphere are hosting a party for them. However, Newton miscalculated where they should have landed, and Sackboy and his friends are sent into The Wedding, while Da Vinci got stuck in the beam and sent there too, along with the invitations he forgot to mail. He evetually makes it back to the party in time.

Larry Da Vinci is a paper humanoid creature, as his face, beard, boots, and hands are made out of cardboard and newspaper. He has angled features, such as a big nose. He sports a long beard made from the pages of a book, and two small, black eyes which are covered by a big pair of 3D glasses. He wears gloves and big boots and his body is similar to that of a Sackperson. His legs are made out of denim.

Larry is a tempered individual. Even though he's a natural leader, he has little patience to handle small things such as wastes of time. His age also makes him very forgetful, and he even forgets his own name numerous times. Da Vinci is a good tutor and a caring companion, ready to cheer up anyone who's down.

His name is a reference to Leonardo da Vinci, a famous Italian Renaissance artist and scientist. However, the capitalisation of his name is different, as it is consistently "Da Vinci" while correct Italian capitalisation is "da Vinci".

Several references to Leonardo da Vinci can also be seen in the Da Vinci's Hideout background, as there are various contraptions and several of his art pieces there.

His Magic Mouth voices in LittleBigPlanet 3 spell his name "Davinci" while his blueprint sticker and the theme description for Popit Academy Term One call him "Larry DaVinci". 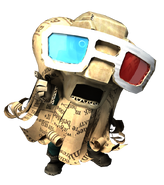 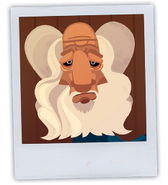 Larry as seen in the game 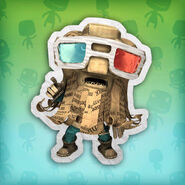 Da Vinci as a PS4 avatar. 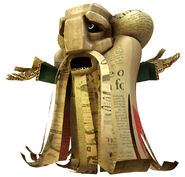