“ Planning to break into the castle? To get over the castle wall, try using the catapult. There should be some way to reposition it. And beware the evil Sumo! ”
— Grandmaster Sensei, in Sensei's Lost Castle.

Grandmaster Sensei is the Creator Curator of The Islands levels and also Ze Dude's sensei, whom Ze Dude recommends when Sackboy beats him at The Construction Site.

Later in the game, Grandmaster Sensei is locked away by the Collector, and freeing her earns you her character model in Create Mode.

Grandmaster Sensei appears as an infant-like figure with white skin. She rests on a pink floaty cloud that is covered in harmful electricity. Her body is pretty miniature compared to her head, hence her supposed young age. She wears a red robe that covers most of her body along with a dashed line sticker on her waist. On top of that, her face sports two red eyes with long eyelashes and a bit of blue eyeliner around. She also has long thin eyebrows and a red Magic Mouth. On her head, she possesses a huge black wig with a red band reducing its mass.

(not finished, don't tinker with it)

Sensei is Japanese for teacher, hence the name Grandmaster Sensei. 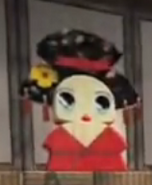 An early version of Grandmaster Sensei that can be seen in gameplay trailers for LittleBigPlanet.

Add a photo to this gallery
Retrieved from "https://littlebigplanet.fandom.com/wiki/Grandmaster_Sensei?oldid=48536"
Community content is available under CC-BY-SA unless otherwise noted.