LittleBigPlanet Wiki
Register
Don't have an account?
Sign In
Advertisement
in: Articles in need of images, LittleBigPlanet 2, Creator Curators,
and 8 more

Eve Silva Paragorica is the Creator Curator of Eve's Asylum, who debuts in LittleBigPlanet 2. She treats patients with the madness emitted from the Negativitron. She also makes an appearance in The Journey Home.

Eve is first mentioned when the Alliance acknowledges Dr. Herbert Higginbotham's current status as a patient in her asylum, turned mad by radiation from the Negativitron.

When she meets Sackboy and Clive, her asylum is being attacked by Meanies, who are attacking the chakras of her tree asylum, burning the place and putting the patients at risk, so she demands help. In exchange, she'll allocate them to Dr. Higginbotham.

Guiding Sackboy through her Asylum, she takes him to its doors and into its trees, introducing him to a Creatinator-powered water gun he can use to defeat the Meanies, which have fire powers this time around. When they finally clear the Asylum, Eve will direct them to Higginbotham's treehouse and will decrease their size, combating the virus that has taken over his brain together.

She joins the Alliance in the Huge Spaceship, and crashes with it on an unknown planet, where she remains stranded. She does, however, help in Avalon's rescue, riding one of his bees, and does follow the Alliance in the battle, though not taking part in it. She gets captured by the Negativitron along with the rest of the team, and witnesses his speech and death.

After the battle, she leaves happily with the rest of the team, in the direction of Craftworld. Avalon Centrifuge

In the The Journey Home, Eve's invitation was stamped in The Factory of a Better Tomorrow, and she later attended the party hosted by Victoria and Larry, welcoming Sackboy back to Craftworld from Bunkum. She is also in one of the party photos, throwing a bone at Oddsock.

Eve is a robot-like creature with an apple head, long raven hair and bangs. She has small lips and a part of her head, which is an apple, is bitten off where her right eye would go, and so she wears an eye patch. She wears a white nurse outfit with a red stripe and shoulder pads, as well as white go-go boots with a red stripe each. She also wears a bird cage around her head, with a big red cross sign at the top and smaller ones around the base. Eve's eye color changes when she experiences specific emotions. When happy, her eye turns pink with hearts in it; when sad, her eye turns baby blue with a tear; when afraid, her eye turns lime green; and when angry, her eye turns blood red.

Eve is the main and sole worker of Eve's Asylum, located in Craftworld, specifically in a green jungle. With a wide knowledge of medicine and medical procedures, she is the one who helps victims from the Negativitron's negative radiation that tends to mess with their sanity.

Eve is very passionate and caring to her patients. She is extremely optimistic, almost to the point of idealism, to contrast the more cynical Clive. However, in the Negativitron's final speech, through elimination, it seems like she is described as self-absorbed, this being her characteristic that created the Negativitron. This can be seen when analyzing the fact that Eve claims the patients 'are nothing without her care, without her love' and how she will only show Dr. Higginbotham's location if Sackboy helps to save her asylum, even when Craftworld is at risk, focusing solely on her needs (and to some extent of her patients'). Eve is fun-loving and compassionate, and she has a good sense of humour and a big heart, as she will most often give you praise after a task is complete.

Her first name and apple head could be a reference to the story of Adam and Eve, the original humans according to the Bible, who ate the forbidden fruit, often considered to be an apple, which cursed humanity with the knowledge of sin. The bite mark on her head could be an extension of this reference. Her last name, Paragorica, is a reference to the medicine "Paregoric", which is used to treat Diarrhea.

one of her other emotions where she is happy.

Another emotion where she is scared.

Another emotion where she is angry.

a sticker of her that you can collect in From Chaos to Cakes. (it also appears on one of the party invitations.)

Eve at the party 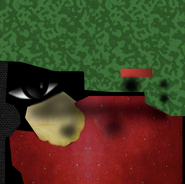 Some Texture for a early design of Eve (Note: Her eye is different and she has a green worm sticking out of her head)
Community content is available under CC-BY-SA unless otherwise noted.
Advertisement