Dr. Herbert Higginbotham is the Creator Curator for The Cosmos in LittleBigPlanet 2.

He is first found in Casa Del Higginbotham in Eve's Asylum, where Sackboy gets shrunk and goes inside of him to destroy the virus put in him by the Negativitron. Strangely though, he still seemed every bit as crazy after the virus was destroyed. He also has dark red horns coming out of his hat, swirly eyes (which are decorations), and he eats socks and licks eyeballs, all when he still has the Meanie Virus.

He is first seen in a picture in Da Vinci‘s Hideout, in a graduation cap with Avalon and Clive. He is later seen at The Factory of a Better Tomorrow, where he was attacked by the Negativatron. He is relocated to Eve’s Asylum for the Mentally Alternative.

He is mentioned by Victoria von Bathysphere, as he is the only Creator skilled enough to repair Huge Spaceship after being shot down by the Negativatron. Sackboy, along with Clive, his old schoolmate, go on a mission to rescue him.

They arrive at Eve’s Asylum, where Eve Silva Paragorica, the owner of the Asylu, informs them that the Asylum has been overrun by Meanies. She says that if they can defeat the Meanies, she will help rescue Dr. Higginbotham, who has become something of a problem in the Asylum due to his mischievous nature. They eventually reach him, revealing Dr. Higginbotham is a bit worse for wear. He has lost touch with reality, speaks in rambling sentences, and eats socks. Eve shrinks Sackboy down to microscopic size, and he goes inside Higginbotham‘s body to destroy the infection. They succeed, but it is revealed that, even cured, Dr. Higginbotham is still just as eccentric. Eve and Dr. Higginbotham join the Alliance, and they journey back to Avalonia.

They return to Avalonia, and Dr. Higginbotham successfully repairs the Huge Spaceship, while still speaking in goofy, nonsensical metaphors. A non-pulsed Larry Da Vinci tells the Alliance members to board the Spaceship, but alas, Avalon is sucked into the maw of the Negativatron before he can. (He was busy talking about how awesome he is, which is no doubt exactly how he wanted to go.) However, Higginbotham believes he is still alive, and simply being held captive. He says they should hurry off and stop the Negativatron and Larry wholeheartedly agrees, saying it’s the most sense he’s made all day. (He’s not wrong.)

Once Sackboy joins them, Eve claims that they have a long journey to the Negativatron. Dr. Higginbotham again starts talking about the Huge Spaceship, saying it’s “the purest essence of beauty”. No, I don’t know what he’s talking about, and neither does anyone else. Sackboy goes of to explore the spaceship, leaving the Alliance in the control room for what will undoubtedly be the most awkward road trip game session ever. Eventually (like, 3 minutes into the voyage), the Negativatron catches up with them. He begins destroying Huge Spaceship, and Dr. Higginbotham says that Huge Spaceship is falling apart and will soon crash. He sends a message to Sackboy, first rambling about breakfast, then telling him to rescue the Sackbots. Once he does, Higginbotham tells Sackboy to save himself, and let the rest of the Alliance die. Sackboy does, and Higginbotham initiates the fail safe in Huge Spaceship’s controls, sealing the Alliance in a cube of metal, just in time for Huge Spaceship to crash into the surface of the Negativatron. Higginbotham helps send a distress signal to Sackboy, who eventually rescues The Alliance from the wreckage. Then the Alliance switches into war mode, mounting Bee 2.0s and flying off to rescue Avalon.

Dr. Higginbotham is in the second stage of the final boss. He pilots a Bee 2.0 and will launch a missile into the Negativatron’s mouth, freezing him. After Sackboy defeats the Negativatron, he will, along with the rest of the Alliance, congratulate him.

Higginbotham is very eccentric, as he spends most of his time in the game making no sense. He has poor social skills, as evidenced by his interactions with the other Alliance members. For example, he seems aloof about the other member’s bemusement at his antics. He also clearly thinks that he makes perfect sense, which is very obviously not the case. He frequently is portrayed as comic relief, with his odd habits and speech pattern. He has a love for vintage video games, as well as space. He appears to be the most stoic and calm of the Alliance, as he was unfazed by the Negativatron’s abducting of Avalon, and later, the attack on Huge Spaceship. It‘s possible, however, that he simply has his head in the clouds so much that he doesn’t notice what’s happening. He did notice when the Negativatron claims he was created by him and his friends, and it is the one time in the game he seems truly scared.

Dr. Higginbotham could be very philosophical at times, whimsically observing the events that transpose around him. This might be why no one understands him, as he expresses himself through strange, overly confusing allegories. Higginbotham is also very childish, amusing himself by playing darts in the Asylum, incorporating an arcade into the revamped Huge Spaceship, dancing with Sackboy and Toggle at the homecoming party, and making paper airplanes. He is also very compassionate, as he decides to let Sackboy take the last escape pod during the Negativatron attack on Huge Spaceship, effectively dooming himself.

After Dr. Higginbotham was infected by the Negativatron, he was admitted into Eve’s Asylum for the Mentally Alternative, which was run by Eve. (Duh.) Over the course of the two years he spent stuck in the Asylum, He befriended Eve, who liked him, but showed some exasperation at his antics in the Asylum. At one point, it is implied he licked her eye.

Once Sackboy and Clive arrived, she reacted with gratitude, saying that she is the only one left who hasn’t given up on Dr. Higginbotham. Once they reach his boudoir, she says they must enter his body to manually rid him of the infection. Once Sackboy does, she appears very happy that her friend has returned, before anxiously asking Higginbotham how he feels. I mean, he doesn’t really answer her, but still.

When they are riding the duck back to Avalonia, Dr. Higginbotham thanks Eve for putting up with all his insanity. She says it was her job, and her delight. Awww. They are later seen helping Sackboy on the surface of the Negativatron, and later celebrating the defeat of the Negativitron.

Eve and Higginbotham are good friends, despite their radically different personalities.

His head appears to be a match box with a large cardboard nose taped on. He has a top hat perched on one corner of his head. He has a shock of white hair, long sideburns, and a white mustache. He has matches for teeth. When he is free from the virus one can see his eyes are slanted protractors giving the impression that his eyes are almost closed and have bags, giving him a tired look. Behind his hair there is a ∑ symbol on his "ears". He wears a brightly colored tailcoat with a floppy red bow tie, yellow pants, and black and white shoes.

Herbert was traditional slang for someone not very smart, which is ironic, because he is a genius. Herbert Higginbotham is a play on the name William Higinbotham, the creator of the first ever visually graphic video game "Tennis for Two" which was the predecessor to Atari's "Pong", the first household game. William played an important role in the video game industry and could be considered the first video game programmer. This explains as to why Dr. Higginbotham has Pong and various other electronic mini-games in his levels, and in the background of The Cosmos. 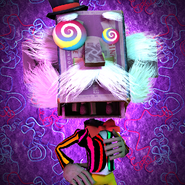 Note the lack of eyes and change of hat. 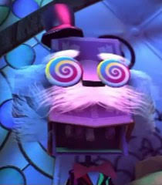