The Creatinator is a character enhancement introduced in LittleBigPlanet 2, it first appears in the third level of

Victoria's Laboratory. This enhancement allows the player to emit objects, like an Emitter. Unlike the related Paintinator, it can emit not only paintballs, but anything it is set to. (i.e. missiles, blocks of materials, water, and even Sackbots!) A switch that is operated by this tool is the Projectile Sensor, which looks like a progress bar. The light bands around the Creatinator change according to the player's Popit color. The Creatinator can also be decorated to suit a particular theme (Eve's splashcannons are blue with a valve on the back, and Victoria's cakeinators look like decorated cakes). Wearing the Creatinator removes the player's hat and/or headgear.

The Cakeinator is one of Victoria's finest creations. It is a head mounted nuclear bakery that blasts giant cupcakes, iced with the player's Popit color. They stick to surfaces and can be used as platforms and weights. Only one can be shot at a time. It is used in the aptly titled The Cakeinator.

This cannon is a reward for activating the first Sticker Switch in Bang for Buck Part 1. It replaces all of the Grabinators in Part 1 with a bomb cannon, allowing the player to blow up cardboard walls hiding prizes and even the flame throwing robots.

This is basically a water gun with infinite ammo. Eve allows Sackboy to use it to douse the flames of her patients' rooms. Flames, that are all the fault of the Meanies. Every room you douse will grant prizes. It is used in Patients Are A Virtue.

In Fireflies When You're Having Fun Part 1, activating the Sticker Switch at the beginning allows use of this unique tool instead of the Grapple Hook. It shoots out floating Bouncepad-equipped bugs that allow the player to bounce almost anywhere, granting access to well hidden prizes. Watch out, if a firebug hits the bouncepad, it will explode.

A very simple weapon used in Rocket Funland, it is used to blast slow moving homing missiles at the other players.

The Sackbots in Where in the World is Avalon Centrifuge? are equipped with laser cannons that are so strong, they neutralize The Negativitron's negative energies. This variant can only be equipped by the Sackbots.

A similar weapon is found in Attack of the Mutant Marshmallows, where it can be equipped to Sackboy to shrink the titular sweet treats.

In the DC Comics Level Pack, Sackboy can be equipped with a super hot acid blaster used to melt giant ice blocks in Ice Cold in Alaska.

In the Muppets Level Pack, Sackboy uses this cloning device to blast mindless copies of Beaker to help him get around Honeydew's ginormous laboratory, in the level Muppet Labs!. The clones can be used as weights, projectiles, and can also be used to grab objects from afar.

In the Toy Story Level Pack, Sackboy uses this machine to create blocks that can be used as stepping stones and projectiles to help him get around Toy Town.

The Odd Rocket shoots rockets that destroy Pink Goo and will follow the players finger on the touch screen. 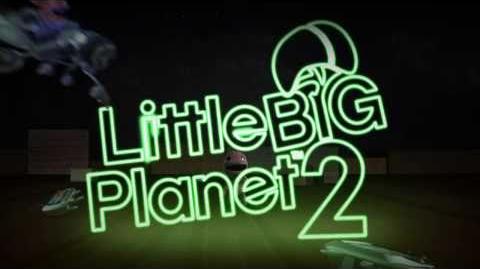 1/2
Community content is available under CC-BY-SA unless otherwise noted.