Clive owned The Factory of a Better Tomorrow, a place where he and his co-workers printed calendars and built huge spaceships. Things were rather well for them until the factory was invaded by The Negativitron

He is first seen in a portrait in Da Vinci‘s Hideout, which depicts him with Avalon Centrifuge and Dr. Herbert Higginbotham graduating from school.

When Huge Spaceship crash lands on Avalonia, Clive is sent by The Alliance to go with the player to Eve's Asylum to find Dr. Higginbotham. Soon, he meets up with the rest of The Alliance and joins amongst them to defeat The Negativitron. As creativity is welcomed back to the imagisphere, he and the rest of the Alliance head on a journey back to Craftworld.

Clive makes a comeback in LittleBigPlanet 3: The Journey Home as the Creator Curator of the second level and the survival challenge it's tied to. He explains to Swoop that the factory was on lockdown until the power was restored from both sides of the place. He is later seen at the party welcoming Sackboy, Toggle, OddSock and Swoop back to Craftworld.

He has a light blue calendar head, a half dark grey and half light grey eraser body and black bent paper clips as limbs. He has hands and feet made of light blue paper. His original appearance included more cartoon-ish eyes and a longer, bushier mustache.

Constantly gloomy and depressed, Clive is pessimistic to a fault. He can be melodramatic, and is always complaining about something or other. Despite this, Clive is the most ”normal” of the Alliance members. He is very perceptive, with the other Alliance members being too crazy or naive to spot a simple flaw in a plan. In the end, during the battle against The Negativitron, he performs an act of bravery by confronting the giant vacuum cleaner, evidencing his development. 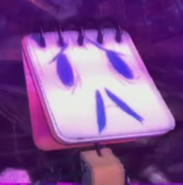 Clive looks worried, however this is his default emotion. 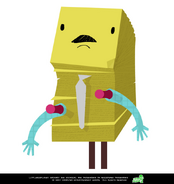 Concept Art for Clive where he appears to have different Design as him being a stack of stick notes. 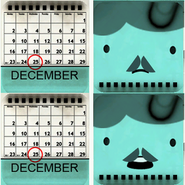 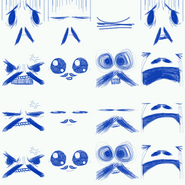 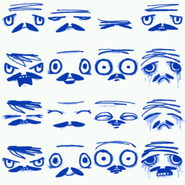 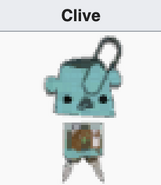 A old icon for Clive's old model in the May 5th 2010 Pre-Alpha. (Note: the icon does not match the model.)
Community content is available under CC-BY-SA unless otherwise noted.
Advertisement