“ “What did I say about the Titans, Newton?” ”
— Captain Pud, in Four Chums Head To Craftworld

Captain Pud appears at the end of LittleBigPlanet 3, saving Sackboy, OddSock, Toggle, Swoop, and Newton from falling to their doom. He later takes them back to Stitchem Manor, and apologizes to Sackboy because of the inconvenience that Newton caused.

Unlike Nana Pud, Newton's mother, Captain Pud actually looks like Newton. He has a light bulb head, just like Newton, but it is more roundish, and has a fabulous mustache on the outside of the light bulb. A fish-like creature on his head that extends down to his waist and wraps around like a belt. He wears a captain's suit, which is blue and gold.

Not much is known about him other than being Newton's father. However, in the challenge room Two's Company, it reveals that Captain Pud is an explorer and a gifted inventor. 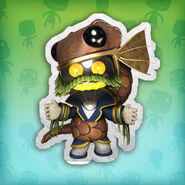 Captain Pud as a PS4 avatar.
Community content is available under CC-BY-SA unless otherwise noted.
Advertisement