“ In LittleBigPlanet 3, explore a world filled with creativity as you explore all corners of the Imagisphere, meet the inhabitants of the mysterious planet Bunkum and face the nefarious Newton. ”
— LittleBigPlanet 3 adventure description

Bunkum is the world in which the story mode of LittleBigPlanet 3 is set in. This is where OddSock, Toggle and Swoop come from, and is also home to Newton, the game's antagonist, as well as a bunch of other wacky characters you will meet within the story. Bunkum is spit up into four sections which are the four themes of the story mode; Prologue, Manglewood, The Ziggurat, and Bunkum Lagoon. The world has 33 playable levels (including mini-games) and 13 cutscenes.

Long before the Negativitron attacked Craftworld, Bunkum was attacked by the Titans, being defeated by OddSock, Toggle and Swoop. The monsters were locked in a tea tin and passed down from guardian to guardian.

After the Hoard had been defeated, Newton abducted Sackboy, telling him that the Titans would soon be free. In reality however, Newton, a poor Creator Curator, had wanted to use the Titans to boost his powers, duping Sackboy into gathering them only for the beings to overpower his will. Working Bunkum's three heroes, Sackboy defeated the Titans and returned to Craftworld with his new friends. 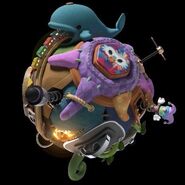 A level from Bunkum 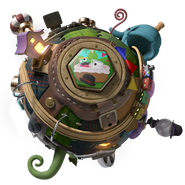 Bunkum Planet Decoration as seen in the story mode

Community content is available under CC-BY-SA unless otherwise noted.